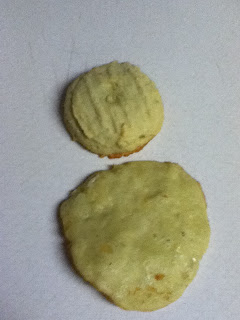 So I had this idea to make up a pistachio pineapple cookie. I used a pineapple cookie recipe and tried to adapt it using instant pistachio pudding in the cookies. My past experience in using pudding mixes in cookies have turned out really well. Not this time, the first batch turned tasting like paste. It was not sweet at all. Assuming I did not add enough sugar and had too much flour, I added more pineapple and sugar. It still wasn't sweet, very disappointing.

So I did redeem myself by making double chocolate chip cookies. 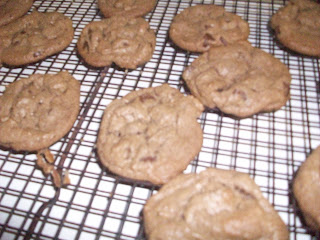 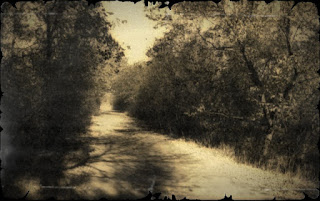 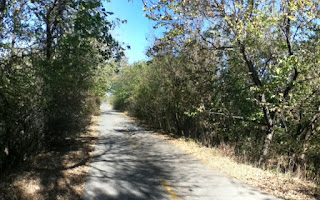 Both the same photo, one is done up up in Old Time Photo app on my iTouch.

Guest Post - Cheap healthy meals can be delicious too!

Making food that is good for you does not have to cost a fortune. It’s about a little creativity mixed in with some fun to have cheap healthy meals that are satisfying enough for your entire family.
One thing that anyone can do is eliminate the fat from their favorite meals and substitute with choices that have both fiber and nutritional value!

Ground white meat: this low-fat alternative to beef and pork is on the rise as another alternative. Not only are these available in ground form, but also in prepared meats such as sausage and sliced deli meat – which makes them far healthier than the traditional pork sausage. Meals like burgers, meatloaf, chili and even stroganoff can be made with ground white meat.

Dry pasta: this economical staple can be used as an entrée or side dish. Another advantage is that is cooks in little time, especially thin pasta like angel hair and spaghetti. When mixed with cooked meat or vegetables, it can be topped in variety of ways such as different soups, gravies and sauces. Lastly, because it is sold in large volume, one package can be used for several meals.

Vegetables: frozen vegetables like spinach, broccoli, mixed and stir-fry varieties can be used a number of ways. Mixed with meat or a dense vegetable such as eggplant, Portobello mushroom, butternut squash or sweet potato, this can make for a filling entrée that can be prepared on a stovetop or oven in little time. For those looking to save money, getting cut, frozen vegetables is a good idea.

Rice: not only is this inexpensive but easy to make. By cooking a cup of rice in hot water for about 20 minutes, you can add a little bit of butter and rice for a delicious breakfast. Serve with steamed broccoli and teriyaki sauce for a quick nutritious meal or by adding a couple of meat patties, top with brown sauce and sautéed onions for a fast meal that can be made in minutes.

Potato: there was a time when potatoes were the enemy with the no-carb craze from the early 2000s. The truth is that potatoes are good for you as they are high in potassium, Vitamins B6 and C. Another factor is that potatoes do not have to be drenched in oil or cheese in order to be edible. One popular and quick recipe is to cut a russet potato into bite-size pieces, soak in warm water for half an hour, drain and cover with dry onion soup, Preheat oven at 350 degree while mixing evenly. Place in casserole dish, cover and let cook for 45 minutes. For a crisp potato, add a tablespoon of canola oil to the mix and cook while uncovered.

Beans: cheap, high in fiber and fun to eat but if you’re cooking dry beans at home; you can take some of the “fun” away by adding a pinch of baking soda to the water while they cook. The only beans you may want to steer clear of are canned refried beans that are cooked in lard. Use beans as a replacement for meat in burritos, salads, casseroles, quesadillas and rice dishes.

These simple meal ideas can boost your health and your pocketbook! 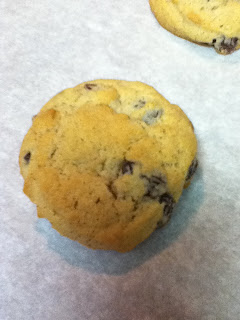 So I use about 2 3/4 cup flour for a single batch.
And she writes down no other directions, which is o.k. I know how to make cookies :)

So I cream the shortening, sugar, eggs, and milk. Then I add the dry ingredients, adding the raisins last.
Drop by teaspoonfuls on a greased cookie sheet, bake for 8 -10 minute in a 350 degree oven. 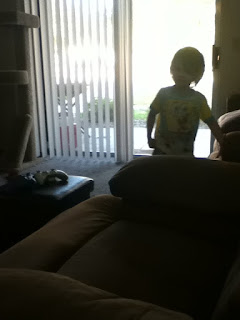 It was a challenge to do this because I was thinking it was sunset this week. So I have an awesome photo for next week. Scrambling at the last minute for this week, I have a photo of my grandson taken with my iTouch
Posted by Julie at 4:05 AM 4 comments: 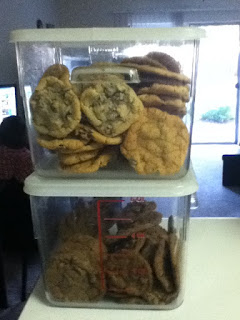 Oh My! I am love. I am going to have to make these!

Six Sisters' Stuff: Homemade Reese's Peanut Butter Cup Truffles: My cute neighbor Summer made these for me a couple of months ago and I have been hooked ever since. I have a crazy addiction to all things c...
Posted by Julie at 12:26 PM 2 comments:

I have got to make these up some day!

Delightful Deets: Carmelitas: Good morning! I'm posting at My World Made By Hand and here is what I shared last month, enjoy! This is one of my favorites, if not my f...
Posted by Julie at 4:10 AM No comments: 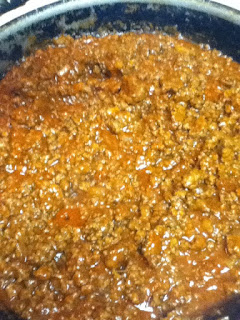 Growing up at at home we called it "Spanish Hamburgers", don't know why or what makes it "Spanish". It is a very simple recipe and an alternative to canned Sloppy Joe sauce.

This is the recipe passed to me:
1 pound ground beef
1 can concentrated tomato soup
About 1 cup of ketchup (or a amount equal to the soup)
Brown the beef (drain excess fat) and add the soup and ketchup. Heat thoroughly. Serve on buns.

However, in my version, I will add:
about 1/2 cup chopped onions and 1 tablespoon of Worcestershire sauce to the ground beef. You could also add green peppers.
Enjoy!
Posted by Julie at 6:32 PM 5 comments: 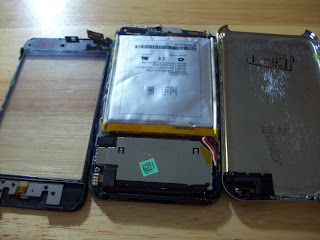 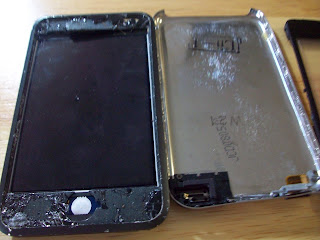 Broken 1st Generation iTouch. I bought it to try to fix it, however I think this is beyond fixing. 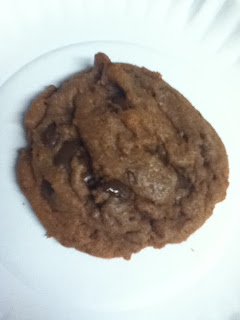 I made two really tasty cookies. First up is is a chocolate chip pudding cookie. The recipe can be found here. The changes I made was I used chocolate pudding, because that is what I had on hand. I also added caramel bits. I really like how this turned out. it is moist, chocolatey, with a hint of caramel.

But the main winner in the household is the Homemade Oatmeal Cream Pies. The recipe can be found here. The batch I made yesterday is nearly gone, I was also TOLD to make another batch. It did turn out really good. My stepson mentioned we should sell them and charge $2-$3 cookie. 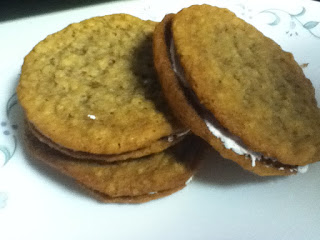 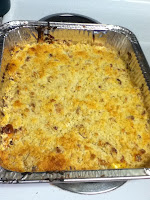 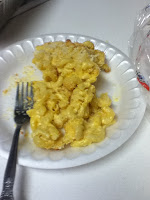 We made up some macaroni and cheese last Friday. We made up a lot because used we ended up using 2 packages of elbow noodles, 1 1/2 loafs of Velveeta Cheese, and 2 cups of cream.

So I will write the recipe for half of amount we used:

Cooked according of package directions, in the mean time,
Cup up Velveeta into small cubes.
Mix cream and cheese over low-medium heat until cheese is melted (maybe use a double boiler as I had cheese burnt on the bottom of the pan.)

Combine noodles and cheese and place in 9x13 pan, salt and pepper to taste, top with bread crumbs.

Bake at 350 degrees for 30 minutes or until bread crumbs are brown. 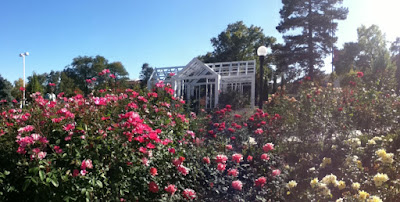 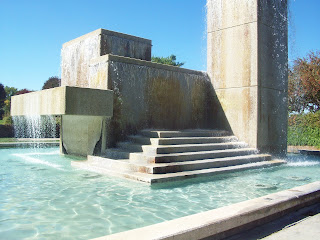 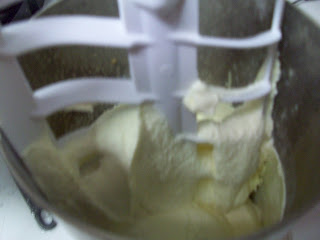 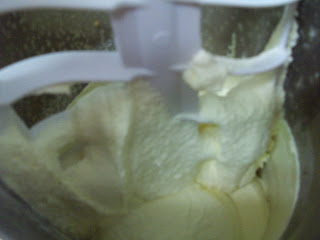 I was overdue to make some home made ice cream. The overall best recipe for vanilla ice cream is found here.

The recipe does not make a lot, at least not enough for 3 hungry guys :) So I doubled the recipe 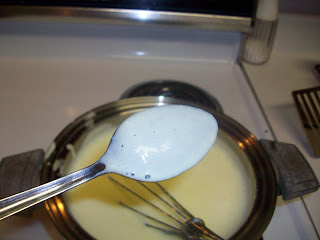 One of the elements of making this recipe is is to make the custard out of the milk, sugar, and eggs. It needs to be thick enough to coat the back of the spoon. So I took a picture of what it looks like.

So to make the ice cream involved 8 egg yolks, with left me with 8 (actually 7, I messed up separating one of the egg yolks) egg whites.
So whenever I have eggs whites, I make coconut macaroons! 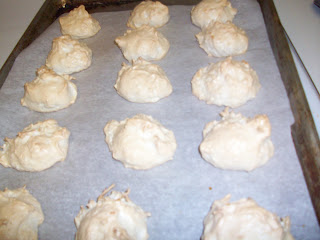