There was a chili cook off at my work and I thought I would make some chili. I personally don't have a personal chili recipe like my husband does, so I thought I would try a chili recipe from one of the You Tube channels I regularly watch, Krocks In The Kitchen. This couple has gone to whole food plant based diet for weight lose and overall health. I like this couple because they have been real about their journey. They have lost a lot of weight, but have gained some back when they have strayed away from their lifestyle.  On their You Tube channel, Brian mostly comes up with the recipes to share. I thought I would try his Super Tasty Vegan Chili. I made this up the night before the chili cook off and brought it to work.

It was tasty, but I ended up bringing a lot back. I guess people prefer to have meat in their chili. Besides, I could not compete with the co-worker who brought Alligator Chili. That was tasty. 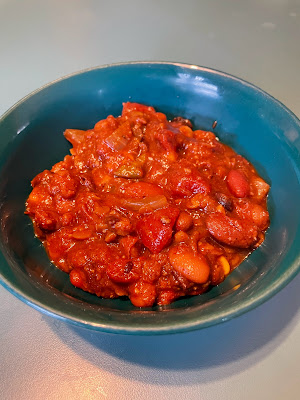 But if you are vegan and looking for a good chili recipe, this is a solid recipe. Though be warned that this recipe make a large batch. Here is all the left over chili that went into my freezer. 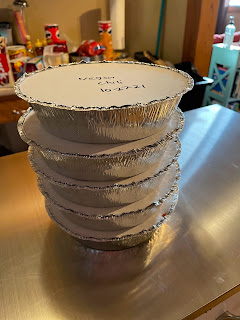 Nobody else (maybe my son, because he eats what I make) will want to eat chili unless I add some meat to it. Which I will end up doing every time I reheat one of these containers.

Here is the blog post link to the recipe:

Sharing this with:
Just Winging It: Link Parties (jwirecipes.com)
Follow

Email ThisBlogThis!Share to TwitterShare to FacebookShare to Pinterest
Labels: chili, Krocks in the Kitchen, plant based, vegan