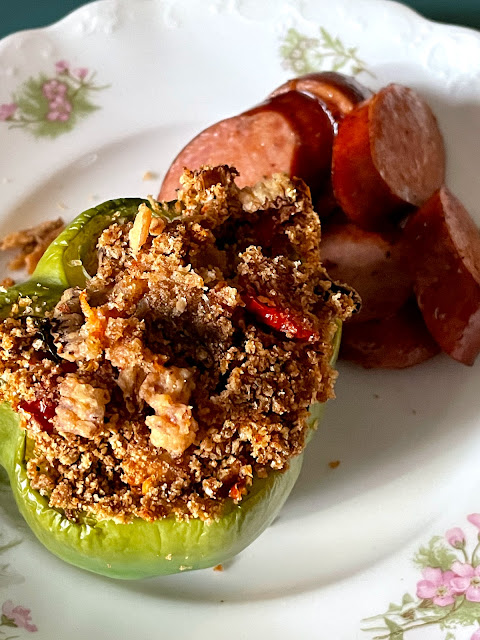 These veggie stuffed peppers are based on a stuffed artichoke recipe found in a vegetarian cookbook I forgot I had. We had moved recently and I had a tote of cook books tucked away in our old place.
To make this I used:
4 green peppers
1 chopped onion
1 clove garlic
1 small pack of chopped mushrooms (recipe calls for 1/2 cup, I used way more)
1 medium grated carrot
3 tablespoons of diced sun dried tomatoes
leaves from a spring of thyme
4 tablespoons of water
salt and pepper to taste
2 cups of bread crumbs
Cut off the tops of the green peppers and put on a baking sheet or small pan
For the filling, sauté the chopped onion and garlic for a few minutes. Add the mushrooms, carrot, tomatoes thyme and water. Cook for another 5 minutes, then add the bread crumbs.
Spoon the filling into the peppers (I had some filling left over, probably because I used more mushrooms than the recipe called for). Drizzle some olive oil on top. I also added some fried onions on top.
Cook for 350 degrees for 25- 30 minutes.
I was initially concerned that the filling was going to be too dry, but it wasn't. I liked it.
Because we are not vegetarians, I had served this will some sausage sliced and fried in a pan.
Sharing this with:
Just Winging It: Link Parties (jwirecipes.com)
Follow
Posted by Julie at 5:17 AM