If you were to search the Internet for Velveeta Mac and Cheese recipes, there are many. Here is one that is close to what I made and here is one that is from Velveeta's site called Ultimate Macaroni and Cheese. As it turned out, one of the comments on the Velveeta site tweaked the recipe and it turns out to be the same as how I made it.
I own a food scale, so I weighed out 8 ounce of elbow noodles.  (turned out to be about 2 cups)
8 ounces (actually it turned out to be 8.8 ounces I was using up what I had left) of Velveeta cut up into smaller cubes
1/4 cup milk
1/8 t garlic powder
1/8 t onion powder
1/8 teaspoon salt
I cooked to noodles according to package directions. To the drained noodles I added the remaining ingredients. Stirred everything over low heat until the cheese was melted. I was that easy.  I say that this recipe would feed 3-4 people.
or just my son, who is a mac and cheese fiend. I took out the portion pictured (1 to 1 1/2 cups)  and I took out a smaller portion for my lunch (which did reheat well) and he took the rest. 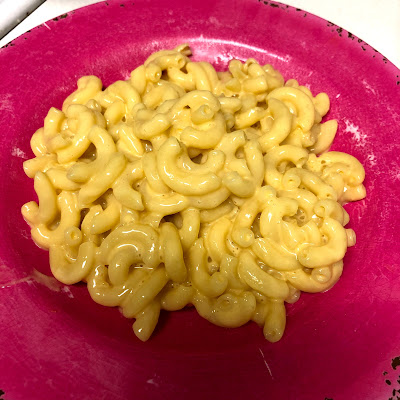 So if you want to tweak this to figure out portions per serving, I am thinking 2 ounces (1/2 cup) of noodles, per 2 ounces of Velveeta (or similar product), and 1/2 tablespoon milk. Season to taste.

In case you are curious, it turned out to be 264 calories for one serving. That is according to an app I used.

I like macaroni and cheese and have made many variation of it using many different types of cheese. No doubt that using Velveeta makes the creamiest mac and cheese.