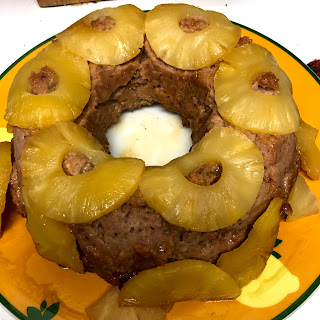 I made ham loaf for the very first time. I wasn't sure what I was going to expect. I had planned to make meat loaf, but next to the meat loaf recipe in my grandmother's cook book is a ham loaf recipe. I thought about it, but I did not think I would find ground ham in the grocery store. Turns out I did find ground ham while I was at the store. So I on the spot decided to make Pineapple Ham Loaf. 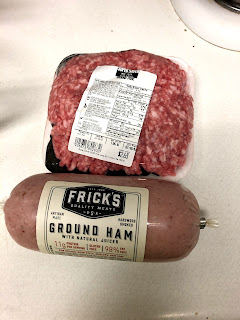 The recipe has 1 pound of ground ham and ground pork 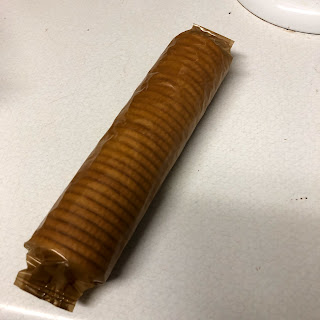 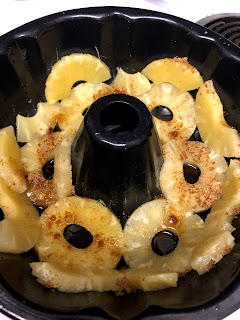 I used a round bundt pan, lined the bottom with pineapple rings. I added some brown sugar to the pineapple. Save some of juice from the pineapple. 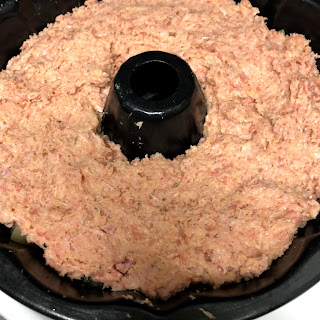 Top with the meat mixture. Poured a little of the pineapple juice, about 1/4 cup (no more).  Make a past of 2 teaspoon brown sugar and prepared mustard and spread on top. Bake 350 degrees F for about 1hour. 1 1/2 hours if using a standard loaf pan. 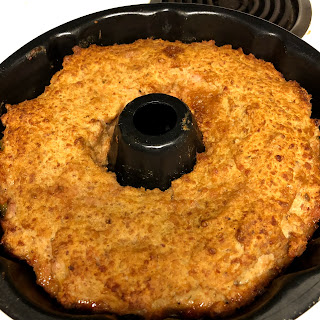 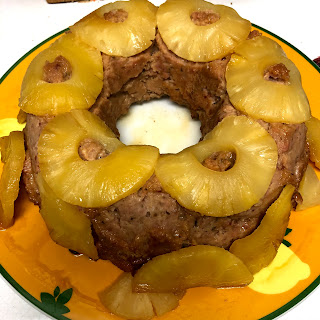 How mine turned out after I inverted it onto a large plate.
Everyone loved it. My son however, was not a fan of the large pineapple. The original recipe used 3 cups of Wheaties. I did not have Wheaties (or any bran cereal) on hand so I used 2 cups bread crumbs / crackers. Had I had gone to the store planning on making this, I would of bought the Wheaties.
With the leftovers I sliced it up and fried it up in a pan. Topped with barbeque sauce I made with brown sugar, ketchup, onion powder, garlic powder, and some of pineapple. It was tasty. It could be equally tasty in s sandwich.
Sharing this with:
Inspire Me Monday
Handmade Monday
Home Matters