One day I was in the mood to make brownies. I usually have grandchildren over every Sunday and one of the activities we do is make cookies. My grandson was on board with brownies. So off to find a brownie recipe. I have a Food Network magazine from September 2015 that has a 50 bar recipes in it and I knew there would be a brownie recipe. At this point my grandson is looking over the 50 different recipes and we decide on the triple decker bars. I had all the ingredients to make them. Triple Decker Bars 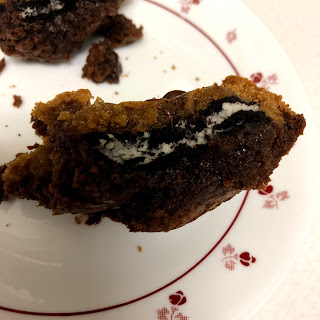 What it is is a bottom layer of brownie dough, a layer of chocolate sandwich cookies (Oreos) , topped with a blondie recipe. What I did was follow the recipe in the magazine and cut the brownie and blondie recipe in half. I wanted to make it in the oblong pan shown below. In the long run it turned out a little thick. 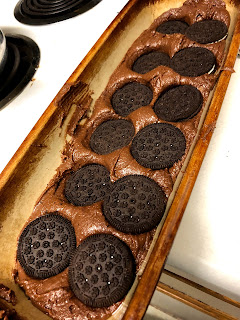 Eventually my grandson got overzealous and really shoved the cookies into the brownie mixture.  I wished I had used a different pan, because I thought it was too thick. I ended up failing in baking it. I ended up overcooking the outside just so that the inside was raw. If I make this again I would still cut the recipe in half and use 9 inch square pan. 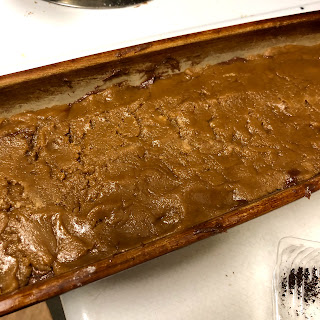 So to make these bars you can find the recipe along with 49 other bar recipes here. I know next time was are going to make the birthday cake bar because my grandson has a birthday next week.  I might also the gluten free peanut butter chocolate bars. My husband's boss can't eat gluten and I thought it would be a nice thought to make these bars.
Or you can make your favorite brownie recipe and blondie recipe and have a layer of Oreo's in the middle.
This post it going to be shared with: