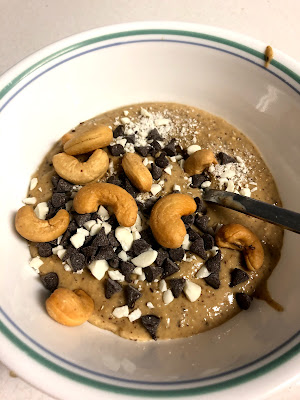 I was in the mood to make a banana smoothie. Adding it in a bowl is a last minute thing. So as you can see there us nothing green in here. I simply did not have anything green.

So what did I add. I added ingredients found in Peanut Butter Oatmeal Bites.

First I added some oatmeal and flax seed (I don't remember the exact amount, maybe a couple of Tablespoons of each). Blended the two down until it was a finer powder. I added a banana, about 1/8-1/4 cup of peanut butter, little bite of vanilla and molasses (don't judge, I like molasses) and just enough milk until it was the consistency of a smoothie.

I topped it with some mini chocolate and white chocolate chips and some cashews.

It turned out that the banana was the predominate flavor. Next time I might leave out the oatmeal and flax seed.

However it was tasty overall, I might tweak this more in the future.