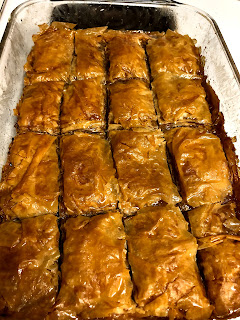 When I was looking through my freezer, I had discover some left over phyllo dough left over from a previous recipe that my husband did. I was initially thinking looking for a cookie recipe, but then I thought of baklava. Looked a Pinterest for a Baklava recipe and found this one. I have never worked with phyllo dough and did not know what to expect. It is really thin and fragile. I had mine break a few times. In the long run I did not think that it really mattered. I went through more butter that the recipe called for. I ended up using more butter than the recipe called for. I also wish I had more nuts. I nearly did not have enough walnuts for this recipe.  Overall, it did not disappoint. It was everything that I expected. Very tasty. I do plan on making it again.

So to give credit where credit is due, I did get this off the Sugar and Soul web site.


This easy and Classic Baklava recipe is loaded with layers of cinnamon, nuts, and butter and saturated in a simple honey syrup! Everyone will love this sweet and sticky dessert!

Adapted from All My Recipes. Baklava does freeze well.Chopped Pistachios can also be used.