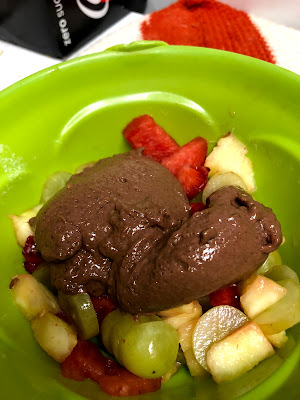 Well, this dessert really did not turn out as I expected. It did not turn out that I took some liberties with this pudding. I was inspired to make a chocolate pudding dish after watching a Tasty You Tube video. So the premise of the video is to take marshmallows and make it into a fancy dessert. So the final dessert is a chocolate mouse, with cream, raspberries (I think), a marshmallow cookie, which involves melting the marshmallow, spreading it out and them baking it until it is golden brown, and topped off with some gold leaf to really make it fancy.

What I did was take equal weight amount of marshmallow (a bag of marshmallows) and half-and-half and melted over low heal and added a large semi-sweet chocolate bar. I took the remaining half-and-half and mixed in a small box of instant chocolate pudding (why not, I had it on hand). First mistake. I did not have enough half and half to completely dissolve the pudding. I should of added enough milk to make it the required 2 cups needed to make the pudding. To put it all together I mixed in the marshmallow and pudding mixture and folded in a small tub of Cool Whip.

Because the instant pudding did not dissolve completely, I had chunks if instant pudding mix. It also really turned out sweet. I should of used unsweetened chocolate. It needed something to cut back on the overwhelming sweetness, like whipped cream or fruit.

This dessert reminded me that I am not really a fan of marshmallows. I could still taste them in this dessert. My husband liked it, my son thought it was just o.k. Overall it was interesting to try, but I would not want to make this again.
Posted by Julie at 10:21 AM