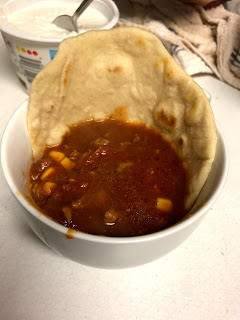 Every Saturday I usually will make dinner. I usually don't know what I am making until the day of, but I had scoped out a chili recipe last week. I had come across the recipe among my many cook books. My coffee table is littered (yes it is definitely cluttered) with cook books and food magazines, especially the Food Network magazines. I will usually go through these books and magazines to  find something to cook. So I found this recipe through a fund raising cook book. This particular book was put out by the Lied Center for Performing Arts in Lincoln, NE. I am not sure how I came across this cook book. I have inherited several cook books over the years. So as far as this chill recipe, I am not going to say that this is the best chili recipe ever, but it is tasty. I was intrigued because it has a packet on Ranch dressing in it. I am not sure if it added anything to in. 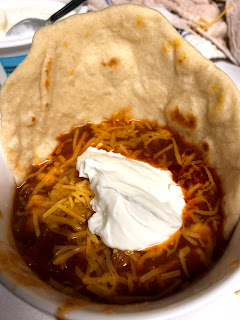 So you just brown the ground beef and onion and combine all the other ingredients and cook slowly over 8 hours. Top it with your favorite toppings. I added sour cream and cheese to mine.

The only really downside is that this recipe make a lot and there are only three of us living at home. So I now have tons of left overs in my freezer. Next time I will make this for a pot luck or when I know I will have more people around to eat it.