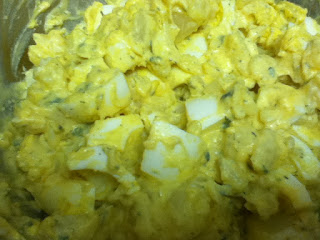 I had planned on posting this recipe a few months ago, but I did not have a photo to share. I had convinced him to make potato salad so I could get a picture. We had family coming over and I though potato salad would make a nice addition to ham sandwiches. So here is the recipe:

Boil potatoes until cooked, but not mushy, rinse and cool. Add eggs, onions, and celery. Mix gently. In a separate bowl mix the remaining ingredients. Add to the potato mixture. Refrigerate 2-4 hours. Serve cold.
Posted by Julie at 6:01 PM