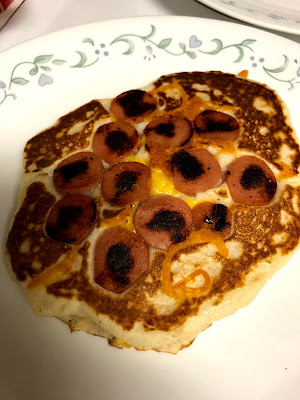 After seeing an episode on Diners, Drive-ins, and Dives, I thought I would try making pancakes with hotdogs in it. I thought about the pancakes a bit and wanted to a recipe that had yeast in it. I had found in the past that when I made waffles with  yeast in it it tasted more like bread. The pancake recipe I used is found here.

What I did was add sliced hotdog, but some cheese on top of that, and topped with pancake batter. My husband and I were not disappointed. To be honest, we were expecting failure but ended up with something that was delicious.  My son thought it was just ok and would rather stick with hotdogs in a bun. I tried adding some relish, but that make the pancake a little soggy.

We will likely make this again, and maybe with some different savory add ins.