Peanut Butter Chocolate Chickpea Blondies - This Can Be Vegan 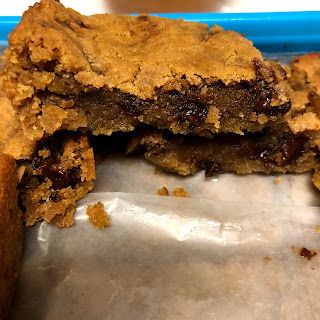 Here it is, another chickpea recipe. Had you read my previous post, I mentioned I was going to try the Healthy Blondie recipe found on Clean & Delicious.

I did have to make a few changes because I did not have all the ingredients to make the recipe. I did not have almond butter so I used peanut butter. I also did not have the monk fruit sweetener, so I used brown sugar. I also forgot the salt. This recipe has all the potential to be vegan and I dare say paleo. also gluten-free. It would of been sugar free if I had the sugar free option. Overall I like it, however my son thought that it was weird and was not a fan. Probably did not like the texture and could make out the chickpeas. It also is oily from the peanut butter. I am not sure if almond butter would of given it a different result. Right not I am storing my blondies in the freezer. I think what I made is better coming from the freezer.

So if I was going to make chickpea blondies again I might go back to my first recipe I tried. I liked the texture better with the flour and egg in the recipe, but if you are vegan you will have to use the Clean and Delicious recipe.

Will there be more chickpea baking in the future? I am thinking brownies.
Posted by Julie at 2:26 PM