Oatmeal Peanut Butter Waffles For One 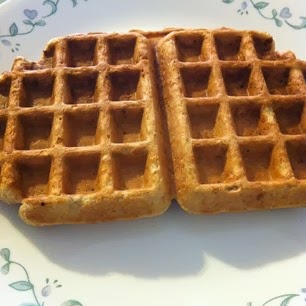 I do like waffles. I had an opportunity to vary from the tradition waffle and try something different. I looked through Pinterest and found this recipe, and since it was recipe for one, it was perfect. It is a gluten free recipe, but that did not matter to me.

Though I did make some variations to this recipe.  One variation I did do on purpose. I added an egg and reduced the water. one of the things I look to do to my waffles is beat up the egg whites and fold them in, it make for a lighter and crispier waffle. One was a complete accident as I misread the recipe. I did 2T of peanut butter instead of peanut flour. I was an honest mistake as I was searching for a peanut butter waffle recipe. And, or course, I did not notice my error until after I put the batter in the waffle iron, so I was concerned on how it was going to turn out.

I was not disappointed. It was delicious.  This will become a regular recipe if I just was to make waffles for me.  I loved the peanut butter flavor. It was a little denser and filling than the basic waffle recipe, but overall I am thinking that this recipe healthier and gluten free.

So here is the recipe for these tasty waffles:

Mix all ingredients except the egg white, beat up egg white and fold in.
bake in waffle iron until done.

An easier version would be just to add the egg to the other ingredients.