I made some really tasty BBQ Meatballs. I made the sauce from scratch from a recipe found on the web:
http://www.simplyscratch.com/2011/09/homemade-barbecue-sauce-part-1.html

I also made some tasty scalloped potatoes. I also used a recipe found on the web:
http://m.allrecipes.com/recipe/228122/herbed-scalloped-potatoes-and-onions?prop24=mobile_hub_rotd

I also made homemade vanilla ice cream. I will share a recipe in the next Show Your Stuff. 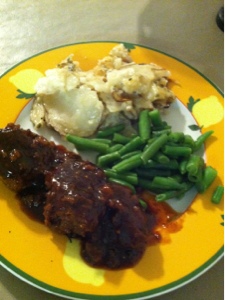